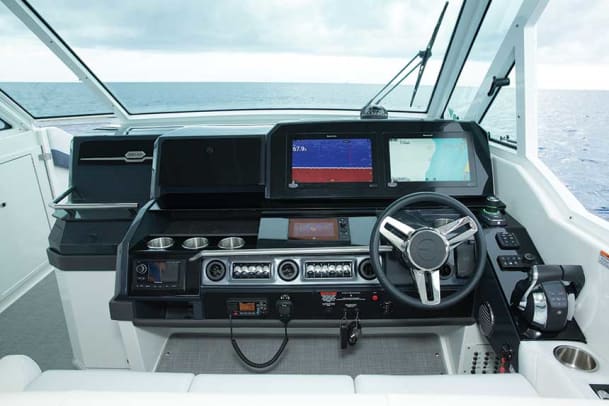 It’s not unusual for a boat company to break out the bubbly to celebrate the launch of a new model. The nice thing about the Champagne toast aboard Formula’s 380 Super Sport Crossover (SSC) at the Norwalk Boat Show in September was that guests were able to gather on the large swim platform around a high-top table. We rested our glasses there, stashed cell phones in the table’s nifty stowage spot for smart devices, and then took in the layout of the latest addition to Formula’s line of family cruisers.

“Our swim platforms have become a trademark for Formula,” said John Adams, the company’s exclusive designer for almost four decades.

As we stood on the 380’s teak-covered platform on a sunny day, it was easy to see why. This boat, Hull No. 1, had the optional, extended, hydraulic water-sports platform. Not only will it accommodate a crowd for a party, but it also should make access to the water and the dock easy.

The 380 SSC is the sixth and smallest model in this series of hybrid designs that combine elements of an open dayboat and cabin cruiser. The 380 is also the first SSC built for sterndrives (a pair of MerCruiser Bravo Threes were under the hatch of the boat at the show), although an outboard version is scheduled to come off the production line in Decatur, Indiana, soon.

“She’s really a baby 430,” Adams said, referring to the flagship of the SSC series. “She has many of the same features on the larger boat, including a single-level deck from the stern to the bow.”

The 380 also shares the 430’s coupe top with a full-height windshield for protection from the elements. Fit and finish on the 380 are noteworthy; at the powered skylight overhead, for instance, rather than install fabric shades to pull over the glass, Formula used fiberglass panels that look great and cut back the heat from the sun. And at the helm, the three-person seat has a trio of bolsters so each passenger can get comfortable when the boat’s at speed.

To port of the helm is the entrance to the cabin, which accommodates four guests overnight. “This is more of a dayboat, but when the weather turns and you’d rather not head back home, the family can sleep here,” Adams said. There’s a double berth, a convertible U-shape lounge, a head with a shower, and a galley.

To access the bow Adams opened the sliding portion of the windshield, another feature that comes from the larger boat. Our group followed him forward and flopped down on the lounges. “Every item on this boat that has to be stowed has a dedicated space,” Adams said, lifting a lid and pointing to four slots for the bow sunshade rail supports.

There are multiple entertaining zones on the 380 SSC, but the boat also has a performance edge, as do all builds from Formula. This model rides on the most recent iteration of Formula’s Fas3Tech deep-V hull. In addition to a sharp entry to prevent pounding, and 21 degrees of deadrise at the transom, the running bottom has steps. They introduce air to the running surface and help break the water’s suction grip on the hull. As a result, drag is reduced as fuel efficiency increases, according to Formula. Speed gets a boost, too. The company says the 380 SSC with standard power should run 51 mph at wide-open throttle and cruise at 32 mph. Performance worth celebrating? I’ll toast to that.

Facebook Twitter LinkedIn Google+ StumbleUpon Pinterest Shares The yacht’s interior furnishings, woods (oak with ebony and ­walnut accents), Cambria quartz stonework, soft goods and the other décor that shares space with this abundant glazing are all low-profile and neutral in hue, providing a backdrop that is elegant yet carefully designed to complement the windows rather…

Facebook Twitter LinkedIn Google+ StumbleUpon Pinterest Shares It’s funny how your perspective can change. Allen Jacobson and his wife, Lila Daut, were dyed-in-the-wool sailors — Lake Michigan multihull cruisers and racers with a resume full of weeknight and long-distance regattas in their Corsair and Farrier trimarans. The excitement of competition, the boat-handling and navigational skills…

Facebook Twitter LinkedIn Google+ StumbleUpon Pinterest Shares Where your heart wants to go, your brain may not let you follow. The Trident 620 from Outer Reef may help get everyone on the same page. How does modern-day boating fit into today’s world of lightning fast (and nonstop) communications, routine, eventless (hopefully) jet travel, and virtual…

Facebook Twitter LinkedIn Google+ StumbleUpon Pinterest Shares Our First Take: There is no arguing with the elegance in these lines. The 680 may be just the boat Prestige was looking for. With a range of boats between 40 and 75 feet, Prestige has, in recent years, made a strong push into the midsize luxury cruising…

Facebook Twitter LinkedIn Google+ StumbleUpon Pinterest Shares Best in Class Take two boatbuilders serving different markets and let them each play to their strengths in a single project. Chris Caswell takes a look at what you get with the new Ocean Alexander 120. Collaborations are nothing new in the business world, and the focusing of…